“Our people, through their taxes, provide the lifeblood of the government. They are the reason for the government’s very existence.”

– President Rodrigo Roa Duterte on the National Budget for FY 2017

On July 20, 2012, Executive Order No. 80 directed the adoption of the Performance Based-Incentive System (PBIS), a nation-wide, integrated incentive system emphasizing individual performance and contributions to the accomplishments of agency targets, computed based on percentage of individual salary in the form of either Performance Based Bonus (PBB) or the Productivity Enhancement Incentives (PEI). Formalized through Administrative Order No. 25 s. 2011, the defining nature of the PBIS is its goal of building foundations of a performance culture and a habit of excellence, and to recognize and reward delivery units based on performance results. The system aims to restore confidence of the Filipino people in the capacity of public servants to make people’s lives better, safer and healthier.

Entitlement to performance-based bonuses is determined through the Results-Based Performance Monitoring System (RBPMS), a unified system to integrate the efforts of the government agencies relative to the five key result areas set by the President.  The bonuses and incentives are sourced from the Miscellaneous Personnel Benefits Fund (MPBF) after accomplishment of the PBIS eligibility criteria and submission of accomplishment reports to the task force. The rankings are done by unit heads, with objective templates to be filled out and collated for evaluation. The implementation of the PBIS is handled by the AO 25 Inter-Agency Task Force chaired by the Department of Budget and Management (DBM) and co-chaired by the Office of the Executive Secretary. Members of the task force include the National Economic and Development Authority (NEDA), Department of Finance (DOF) and partner agencies responsible for implementation, with OP and DBM as lead. Monitoring of agency compliance and performance scorecards are made available online. 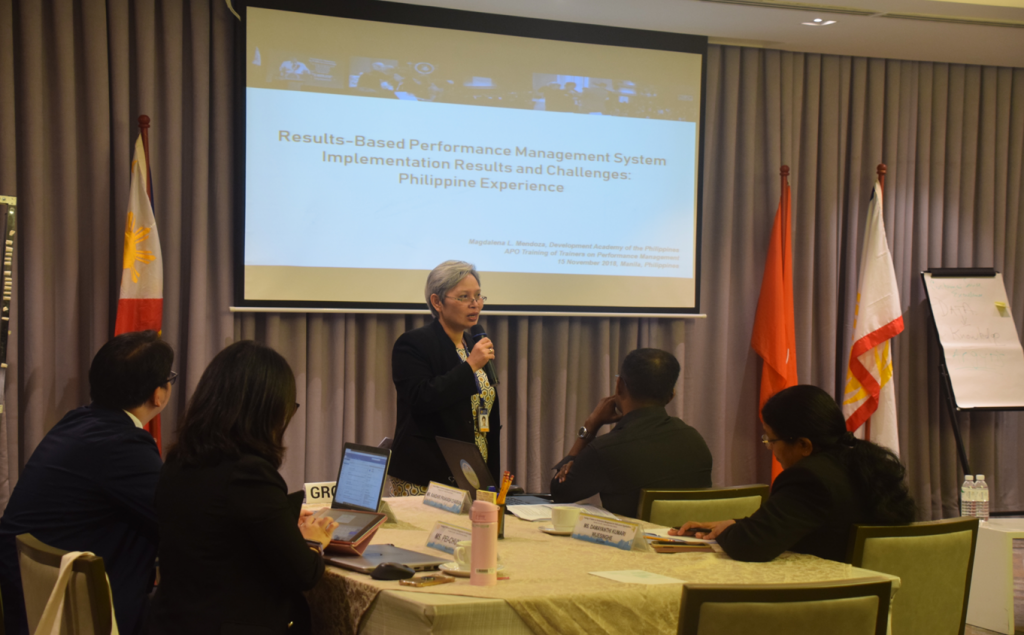 Since its implementation in 2012, the PBIS has been subjected to several phases of development, with performance indicators and targets reflected in the Organizational Performance Indicator Framework (OPIF) Book of Outputs. Through the PBIS and RBPMS, the government sought to strengthen performance management through the harmonization of existing performance monitoring, establishment of appraisal and reporting systems, veering away from across-the-board bonuses and linking incentives with results that matter to citizens. Within five years, the number of participant agencies increased from 184 out of 191 agencies in 2012 to 273 out of 307 agencies in 2017. This includes government-owned and -controlled corporations (GOCCs), state-owned universities and colleges (SUCs), and other executive offices (OEOs). PBBs are granted on the condition that physical targets, conditions for good governance, and performance management conditions are met. Physical targets include priority program targets, major financial outputs, support to operations and general administrative support services; conditions for good governance which include the establishment of a transparency seal, posting of bid notices and awards on the website of the Philippine Government Electronic Procurement System (PhilGEPS), liquidation of all cash advances of officials and employees, and the establishment of a Citizen’s Charter or its equivalent. The third condition, performance management, involves the cascading of targets, System of Rating and Ranking (SRR) and communication and change management. 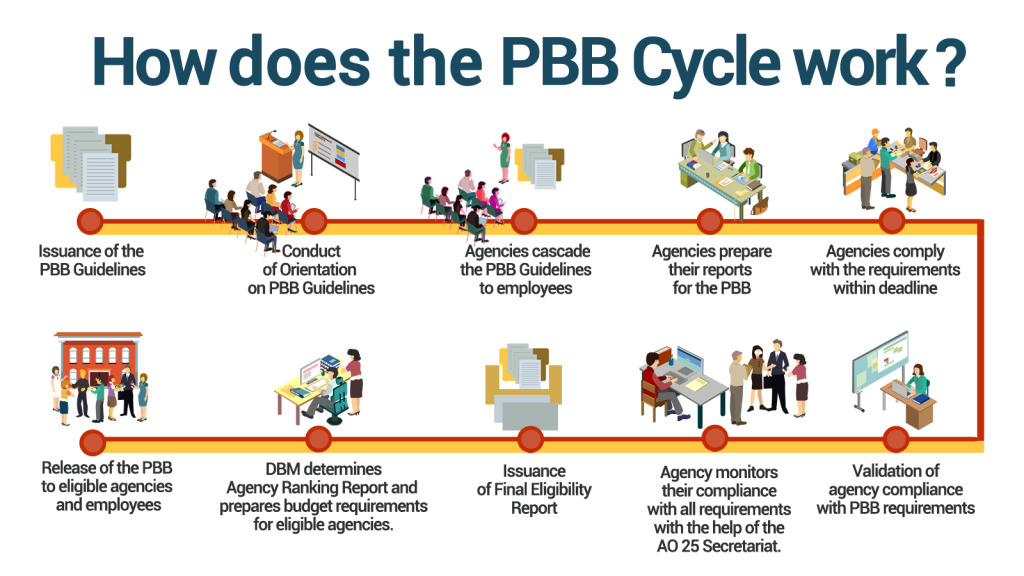 The eligibility of an agency to be entitled to the PBB system includes considerations such as the Major Final Outputs (MFO) Targets under the Performance Informed Budget (PIB) of the GAA, Targets for Support to Operations (STO) and the General Administration and Support (GASS) Targets which include the Budget Utilization Rate (BUR), compliance to the Public Financial Management (PFM) reporting requirements of the COA, and ISO-aligned documentation of at least one core process. In the future, the government hopes to further refine the PBIS by introducing tighter requirements on performance incentives, conduct review and validation processes, increase collaboration between agencies, streamline government transactions and most important of all, to build the capacity of public servants. All these share the goal of reforming culture and mindsets on government work and delivering meaningful results to citizens.