In its crucial function to assess and collect national taxes, fees, charges, and accounting for all revenues collected, the Bureau of Internal Revenue (BIR) serves as an indispensable arm of the Philippine government especially with the passage of Republic Act No. 10963 or better known as the Tax Reform for Acceleration and Inclusion (TRAIN) Law. The unprecedented pressure to improve the quality of public service delivery also stresses accountability, transparency, and productivity. This period of transformation puts more emphasis on measuring the productivity of the government and assessing its performance. Productivity is generally defined as the ratio of output over input, and its measurement describes the efficiency of production. Using Atkinsons Review’s methodology, tax collection activities were examined and its commensurate gains, total collections, operational costs, and administrative costs. Data culled from the BIR Annual Reports 2000 to 2012 showed an increasing trend in tax collection, achieving its breakthrough PHP 1 trillion revenue in 2012. 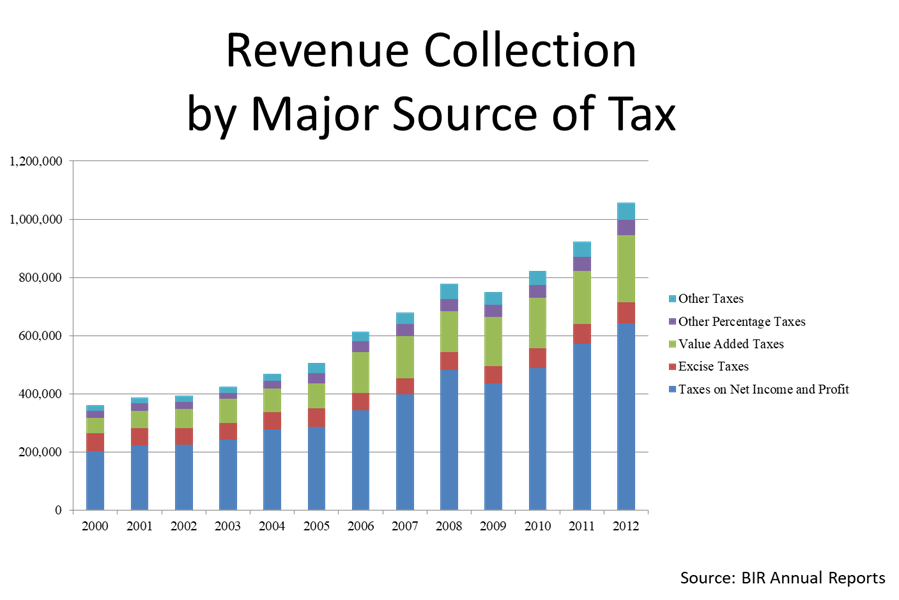 Even so, the remarkable performance was achieved at generally lower administrative costs and fewer personnel. BIR reduced its cost of every PHP 100 tax collected by more than 50%, from PHP1.25 in 2001 to PHP0.60 in 2012. 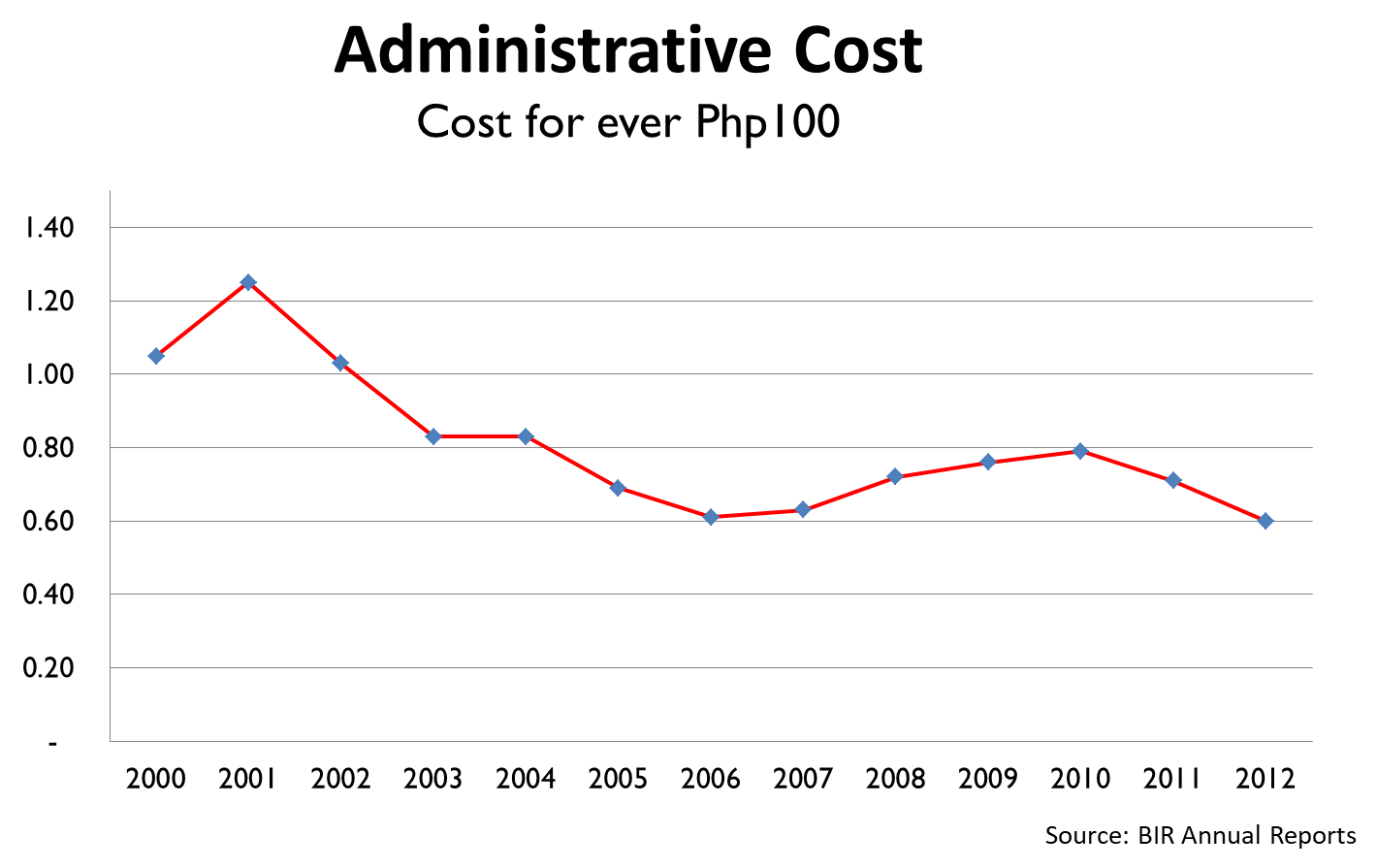 The bureau also maintained a steady decline in staffing complement with a 15% decrease from 2000 to 2012. 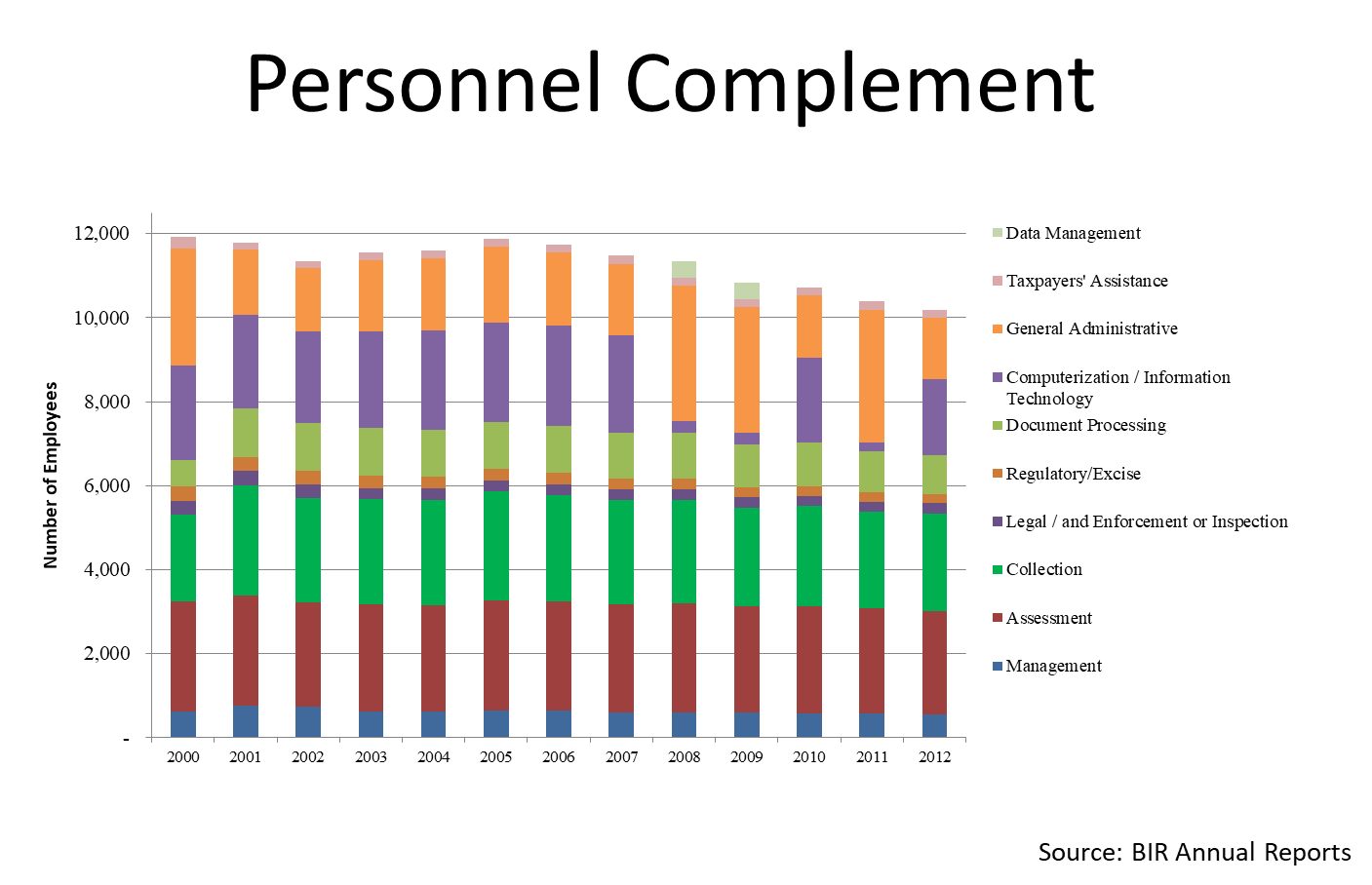 It continuously explored means of increasing productivity by doing more with less, and this showed in its productivity ratios reflecting an overall highly positive Total Factor Productivity (TFP) which is computed by the value of outputs over the value of total inputs. While it exhibited slight fluctuations, the TFP index demonstrates a generally upward trend as it altered with the changes in the value of inputs and outputs through the years. 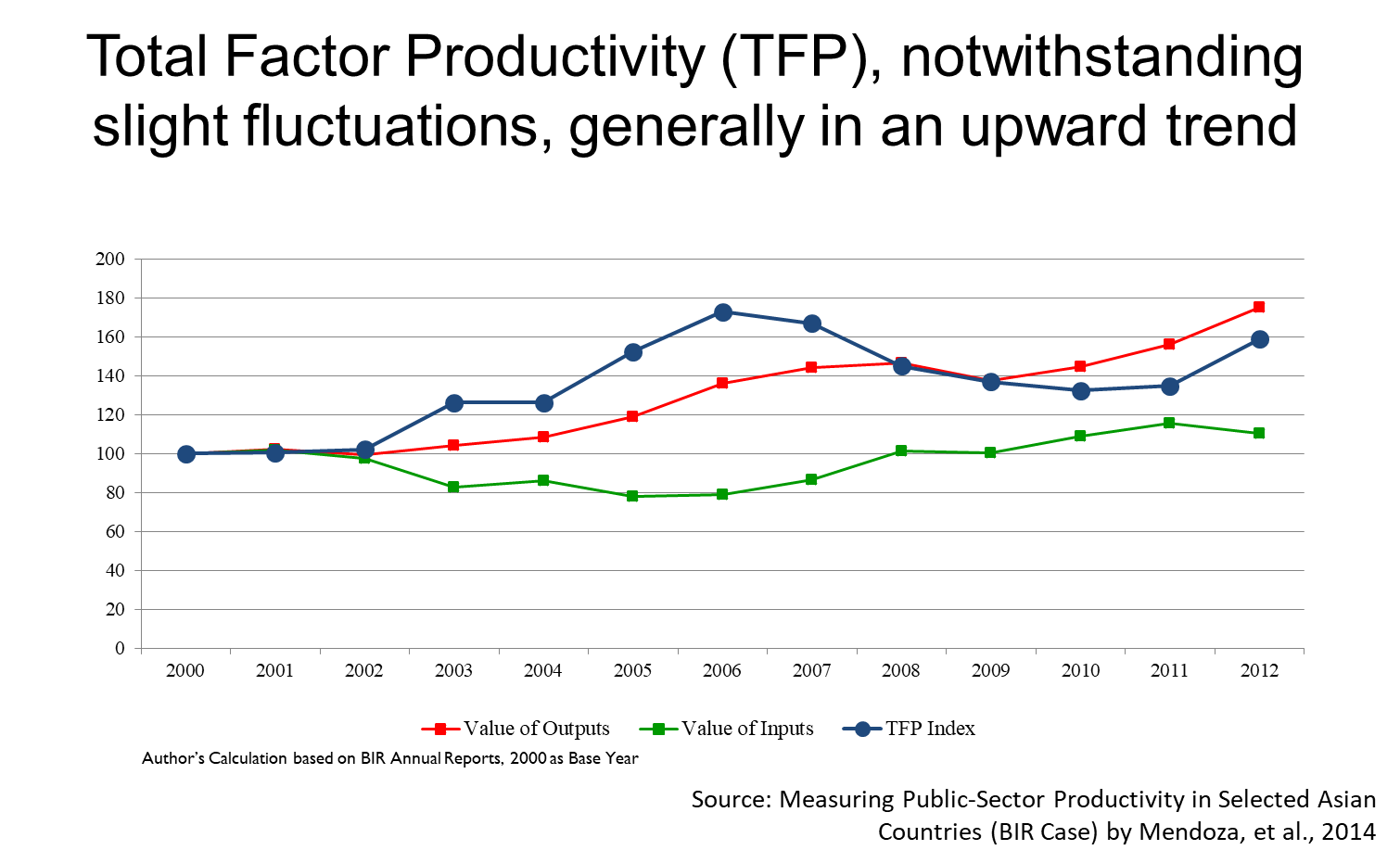 The general uptrend from 2002 to 2006 can be attributed to new revenue measures and intensified collection efforts combined with an escalation in the automation of its frontline and backroom operations. However, this was disrupted by the slowdown of tax collection in the aftermath of Typhoon Ondoy in 2009, the implementation of the Salary Standardization Law, and increased operating expenses of two major BIR projects, e.g., the National Program Support for Tax Administration Reform and the Tax Computerization Project. The TFP series bucked the downtrend in 2011 with vigorous tax collection efforts and containment of administrative costs. During this timeframe, notable best practices identified were the introduction of the Tax Computerization Program, e-Services, and the Run After Tax Evaders (RATE) Program. These initiatives resulted to better public service delivery with increased tax collections and minimized administrative costs whilst simplifying processes, modernizing procedures, and offering citizen-centric services. This study formed part of the Asian Productivity Organization’s (APO) Research on Performance Management in Public Sector Organizations in 2013 which looked into how effective and efficient the public sector has been in the changing phenomenon of recent years, what new approaches and systems have been introduced and how effective and efficient they were which are all meant to gauge productivity. Productivity measurement of the Bureau of Internal Revenue’s tax collection serves as a pilot study into the Philippine government’s productivity stories where organizational changes and developments provide an explanation of the trends in productivity performance over time. It can also serve as a prospect of comparative productivity performance data through various offices to encourage yardstick competition in the government.